So recently I've been seeing a lot of the new trend that has hit the world of vegetables, and that is spiralized noodles, otherwise known as zoodles. However, as I did not want to ave to purchase a spiralizer, I did not really pay too much attention to them. But on my weekly shop in Sainsbury's Fallowfield I happened to come across a packet of pre-spiraled Butternut squash and thought the opportunity to try them for myself was too hard to overcome, especially for only £1.20. I was a little worried that my meal was going to be bland, but I have to say I was extremely excited to find my meal absolutely delicious and would recommend them to anybody. So here is my recipe for a quick meal made up of any leftover veggies you might have in the fridge, accompanied by the so called 'boodles'.

1) First of all I diced my onion, garlic and chili and put them into a pan over a low-medium heat with a touch of oil.
2) After a couple of minutes, I added the chopped asparagus and tofu pieces and left to cook in the pan.
3) Whilst the rest of the ingredients were cooking, I emptied out half of the butternut squash noodles into a bowl and microwaved it for the time it said on the back of the packet (around 2-3 minutes)
3) Once these were done I emptied them into the pan full of the other veg.
4) I then wilted down my spinach, and then also added that to the pan.
5) Season with salt and pepper, serve and enjoy!

Tip: I added a little grated red leicester on to mine to make it extra yummy, but otherwise this meal is also completely vegan!

If you enjoyed these butternut squash noodles, Sainsburys are also selling pre-spiraled courgette too! 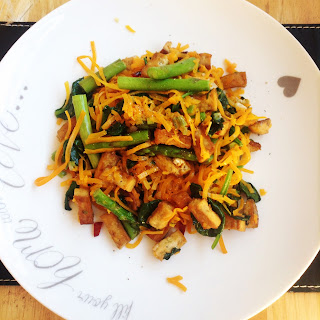 I love risotto, it one of my favorite foods ever and it sounds really posh! The thing I love the most about this particular risotto is the fact that it barely uses any ingredients and the ones it does use are likely to be in your fridge/freezer already. In other risotto recipes there are expensive ingredients that I personally don't always have available, and many of them also use wine, whereas i believe wine is for drinking! So here is a student friendly, vegetarian, mint and pea risotto.

1. Dice up your onion and garlic clove, whilst putting a large sauce pan on the hob with a little oil, and filling your kettle with water and turning it on to boil. 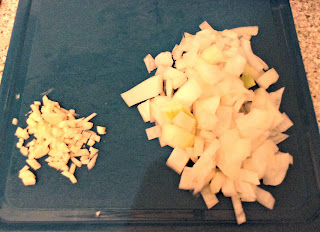 2. Once the kettle has boiled, fill a jug with the boiled water and add a tea spoon of bouillon to make a stock. If you prefer it a little stronger, add more.
3. Add the diced onion and garlic to the hot oil and also add the arborio rice.
4. After a few minutes, add the first bit of stock to the pan. Only pour enough in to just cover the onions and rice. Stir gently.
5. Repeatedly pour small amounts of stock into the pan, stirring almost contiuously.
6. Whilst doing this, add frozen peas to a separate smaller pan and boil.
7. Once the rice is soft and has absorbed the stock, drain the peas and add them to the rice mixture. Add your mint and any other seasoning.
8. Mix all together, and serve onto a place. If wanted, grate cheese onto the top of your risotto and enjoy! 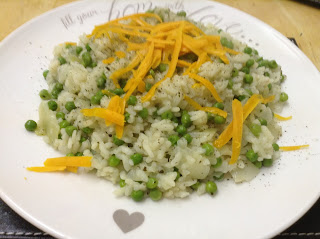 Halloween is one of my favorite times of year, and also a good excuse to bake some spooky snacks! Brownies are one of my favorite bakes and are so easy to make. However, i'm not very good at decorating my bakes so I came up with an easy way to decorate that still fits in with a halloween theme, perfect for a horror movie night in.

Method:
1. Chop up the 200g of dark chocolate, and place it in a heat proof bowl along with the 200g of butter. Put the bowl on top of a small saucepan filled a quarter of the way with water on the hob, and wait for the butter and chocolate to melt. One it has, put the mixture to one side to cool. 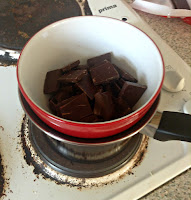 2. Preheat the oven to 160 degrees C. Grease two medium sized tray tins.
3. Chop the white chocolate up into smaller chunks
4. Break the three eggs into a large mixing bowl and add the sugar. Whisk this mixture (preferable with an electric whisk) until it becomes creamy and light.
5. Pour the chocolate and butter mixture over the egg/sugar mixture and fold them together making a figure-8 movement. Be careful not to take all the air out of it.
6. Sieve the flour and cocoa into the mixture and again, fold it in until it has all melded together. Finally stir in the white chocolate chunks.
7. Pour the finished mixture into the two trays and put them in the oven for approximately half an hour. To see if the brownies are done, gently shake the trays and see if the middle wobbles. If it does, it's not quite done.
8. When they have done, take the brownies out of the oven and  leave to cool. When cool, take the brownie out of the tray.
9. Mix up some icing, with icing sugar and water, and if you have it, mix in some food colouring. As it's halloween, I used green icing.
10. Splatter the brownies with the icing, then cut into smaller squares and eat! 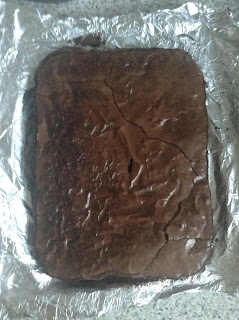 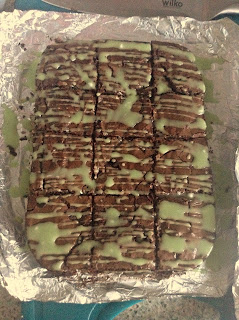 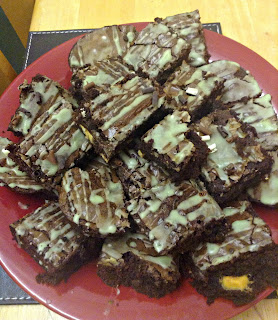 Anybody that knows me, will tell you about my love of pie. However, as a vegetarian it can be so frustrating when supermarkets don't stock any meat free pies, or if they do it is a very limited selection. However, my pie dreams were realized in Manchester last year when I found Pieminister. Located on Church Street, only a five minute walk from the Arndale Center, it is easily accessible and really good for price.
Pieminister have a range of vegetarian pies, my favourite being the 'heidi' which contain goat's cheese, sweet potato, spinach and red onion. However, there is also the option of a 'wild shroom' pie, which, as he name suggests, contains wild mushrooms, asparagus, cream and white wine. There are two other pies described as 'open top' pies, which are the 'Mighty Aphrodite' (aubergine, green lentil and red pepper) and the 'Green Goddess' (Spinach, feta, butternut squash and chickpea).
Additional to the great selection of vegetarian pies, is the all important sides that come with these pies. Pieminister does not only serve the standard mash and gravy, there is a whole host of other toppings that you can purchase, or in fact get them all with the 'mothership'. The 'mothership' includes your pie of choice, as well as creamy mash, minty mushy peas, crispy shallots cheddar cheese and a red wine gravy all for £7.95. For me, there is no discussion. 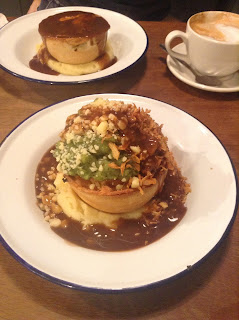 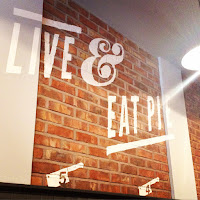 As a student it can be really rather annoying when you've had a full day at uni, you have more reading to do for the next day, and you get home and realise you also have to cook your own dinner, wheres mum when you need her? For this reason, it is such a great idea to cook more food than necessary so that you can freeze it and then reheat it through when your running low on time/energy. A great example of this is a lasagne. Not many shops tend to sell one portion oven dishes, so it is likely that you would make more than one portion whether you intended to or not. I made this particular lasagne with Quorn mince as I happened to have some left over, but you can also make it with vegetables or lentils, be inventive! 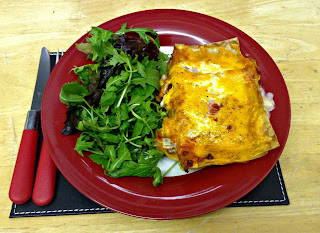 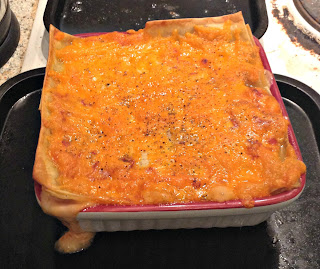 Chilli con Carne is one of my favourite dinners as a student! It's quick and easy and most importantly, absolutely scrummy! I always find that food with a bit of a kick is a great way to warm up in the cold weather, so a spicy chilli is a great way to do this! As a vegetarian it can be hard sometimes to try and think of alternatives to meat dishes, but with the help of 'Quorn' mince this job is easy. Alternatively, a veggie chilli could also be made with a election of beans, such as kidney or butter beans, or even lentils, or a mixture of all of these ingredients.

Recipe:
A little bit of olive oil
Half an onion
Quorn mince
Passata
Jalapenos (would normally use chilli powder but i ran out!)
Basmati Rice

1. Fill a small sauce pan with water and set on the hob to boil. Once at boiling point add the basmati rice and turn down the hob so that the water is simmering. For perfectly fluffy rice, only stir the rice once when it first goes into the pan so that it does not stick, then leave it for around 10 minutes until you stir it again.
2. Put a small amount of oil in a medium sized frying pan and leave on the hob to heat up.
3. Roughly dice the onions and put them in the frying pan. Add the Quorn mince shortly after.
4. When the onions have softened, turn down the heat and add the passata.
5. Chop up a few jalapenos and add them to the mince and onions mixture. Add additional seasoning at this point (chilli power, garlic, salt and pepper etc.)
6. Drain the rice, and serve! 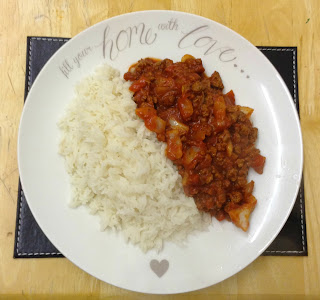 As the nights draw in and the temperature starts to drop, we look to food as a source of comfort. An incredibly quick and easy dinner of a heart warming Butternut Squash Soup! This recipe only takes around half an hour to make and is incredibly simple, cheap and perfect for busy students.

Ingredients:
1x half a butternut squash
2x tablespoon of bouillon (or other stock)
Seasoning

Method:
1. Fill a large saucepan with water and the bouillon and set on the hob to boil
2. Peel and chop the butternut squash into smaller pieces, remembering to scoop out the seeds in the middle. Drop into the pan and leave to simmer for around 20 minutes or until soft
3. When the squash is soft, drain out some of the water in the pan, leaving only a little bit in depending on how you want the consistency of the soup to be.
4. Using a hand blender, blitz the butternut squash until it has a smooth consistency.
5. Season as you wish, I personally use salt, pepper, garlic and chilli.
6. Serve with bread and enjoy! 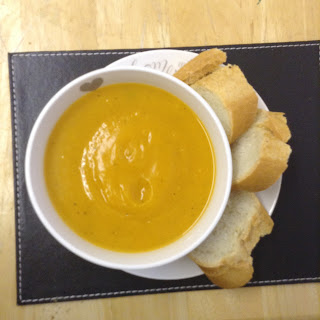